The Mask Of The Holy Spirit

A sad fact about our history is that very few people of real intelligence, compassion and moral integrity want to enter the political arena. The result is as plain today as it was during the reign of Caligula or the Borgia popes.

“Man, proud man, dressed in a little brief authority” has always been deserving fodder for the stylus of Juvenal, the quill pen of Jonathan Swift, the typewriter of Joseph Heller, the brush of Steve Bell and I hope you will find my computer-generated offering similarly sharp and savage.

An endless parade of self-serving and destructive fools have led us to the ultimate peril, the unbearable possibility that we will forever destroy the delicate mechanisms of our miraculous planet. It is no comfort to me that in an infinite universe there may be many such because it is equally possible that ours is the only one there ever was or will be.

For the Italian critic Stefania Auci the trilogy “opens the door to a world of darkness even more terrifying than the daily news.” But that world is not allegory, though the events described are purely from my imagination, and the outrageous cavalcade of criminals that gallop through the books, including the entire Bush family, Condoleezza Rice (so prominently on display behind the weasel Kavanaugh in the senate hearings), Cheney, Kissinger, Amado Carrillo Fuentes, Semion Mogilevich, Papa Ratzi, Silvio Berlusconi, yes, even Robert Mueller and many, many more, are frighteningly real.

Book One, The Vampires of Juarez . . I have no interest in vampires though these are not entirely metaphorical . . the tragedy of las desaparecidas, the young women brutalized and murdered in Juarez who at this present date number in the thousands without any real investigation or end in sight, coupled with the cruel hypocrisy of the War on Drugs.

Book Two, The Demons of 9/11 . . needless to say, I do not believe the whitewash that was the 9/11 Commission . . a challenge to the somnambulant consensus about a conspiracy that intentionally deformed the political discourse of the entire world and led inevitably to the lamentable reign of the last POTUS.

Book Three, The Mask of the Holy Spirit . . thank you Gore Vidal for saying “monotheism is the greatest disaster ever to befall the human race” . . the investiture of Joseph Ratzinger as Benedict XVI and, just for fun, a passeggiata through the Italian Renaissance involving a doppelganger of the trilogy’s central character.

Caligula, Rodrigo Borgia, Donald Trump. Peas in a pod, what more can one say. When will we ever learn.

But wait, before you rush out and join The Voluntary Human Extinction Movement, the Italian reviewer Sergio Riotino called the trilogy “the perfect balance of denunciation and entertainment.”

My attempt is always to leaven the horror with humor and humanity and the ghastly with the glorious. As to why I have called it The ‘Carnivore’ Trilogy, well, you’ll have to read it to find out.

We highly recommend reading the entire Carnivore Trilogy starting with The Vampires of Juarez, following with The Demons of 9/11, and finally The Mask Of The Holy Spirit. 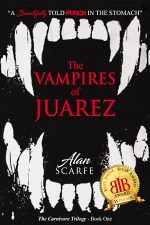 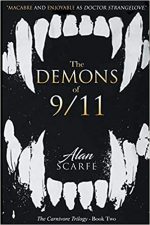 Alan Scarfe is a well known British-Canadian actor, director and author. Originally born in England, he immigrated to Canada and has enjoyed an extensive acting career in Canada, England, and the United States. He is also the former Associate Director of Canada’s Stratford Festival and the Everyman Theater in Liverpool.

If Alan looks familiar to you, there’s good reason. With his long career, of which he logs multiple appearances in film and television and has performed well over 100 stage roles across Europe and North America, you have undoubtedly seen him either on stage or screen. Some of his film and TV credits include Star Trek, Seven Days, The Highlander, Stargate Atlantis, Lethal Weapon 3, Mysterious Island and The Outer Limits, just to name a few.

Among his long list of credentials and acting awards, he can now count himself as an award-winning author, having won the BIBA Star in 2018 for his skill with scene-setting, a BIBA in 2019 for his book The Revelation Of Jack The Ripper, and now a 2020 BIBA for Mask of the Holy Spirit. Perhaps because he is the consummate actor and is well accustomed to becoming a character, Mr. Scarfe is very adept with the characters he develops in his books. His eye for detail and his sharp wit, along with a vast reservoir of knowledge, allows him the privilege of setting a scene with stunning finesse. Ripperologists across the globe will certainly appreciate the massive amount of research that went into Mr. Scarfe’s book The Revelation Of Jack The Ripper, and may well have more than one shiver as the author leads his hapless readers deep into the dark mind of the central figure in the story.

Learn more about Alan Scarfe at: